I wasn't originally going to post this next one because, quite frankly it's not for the squeamish. If the sometimes brutal predatory-prey relationship of the natural world makes you queasy or you are sensitive to body-horror, then you should probably not look behind this SPOILER tag. Also, if the moderators want it deleted, I will gladly oblige. 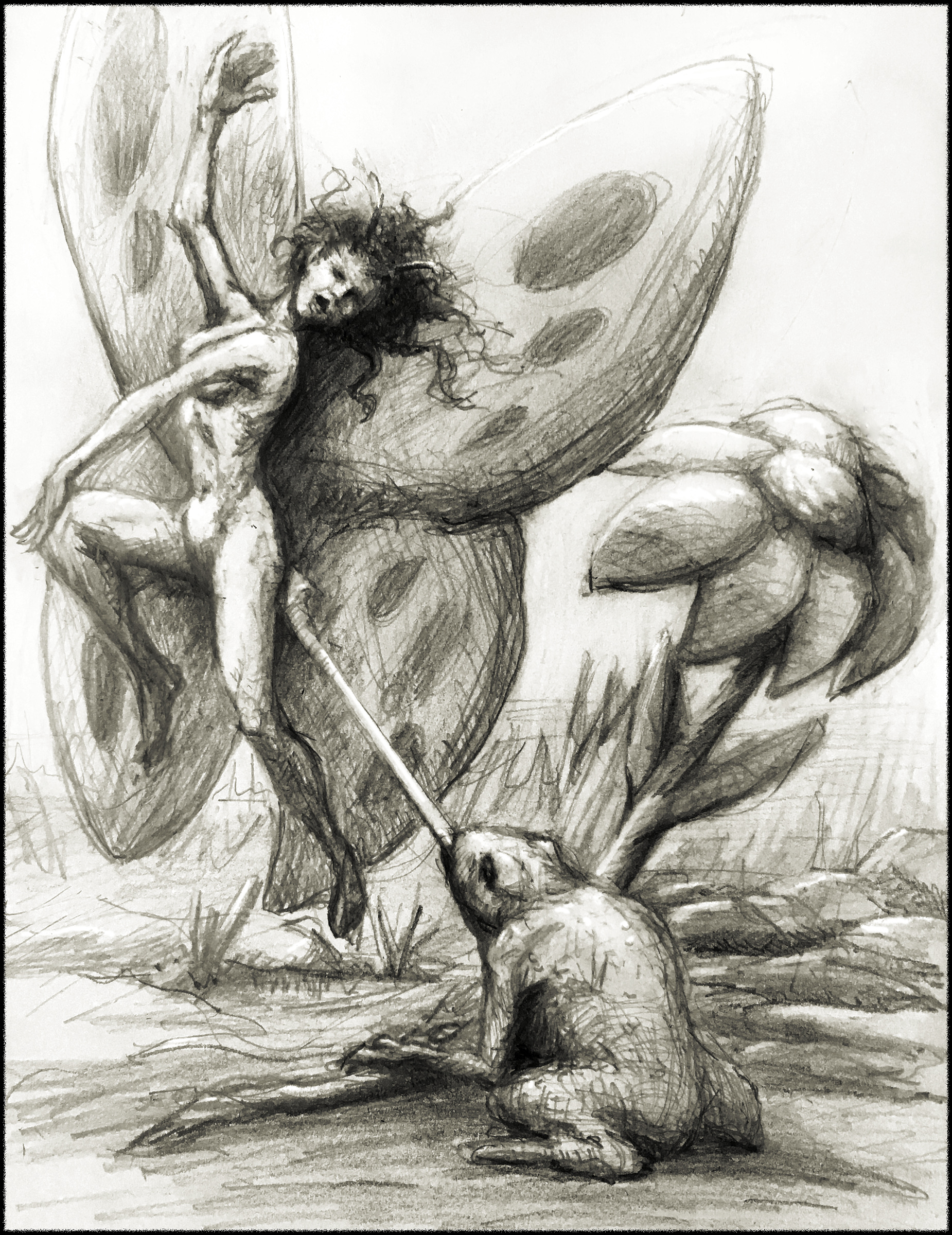 A thumbnail layout-sketch of the lavapit area in my Earth Temple dungeon---a place with so much going on it has stymied me since I started trying to learn how to draw. This was suppose to be an alternate perspective looking down, which I thought would get me out of the doldrums, but I botched it---way too flat. Oh well, maybe next time. That's what thumbnails are suppose to be for.

Orcs In a Hole
This idea came to me in the middle of the night. I banged out a rough sketch to remind me for maybe a future redo. 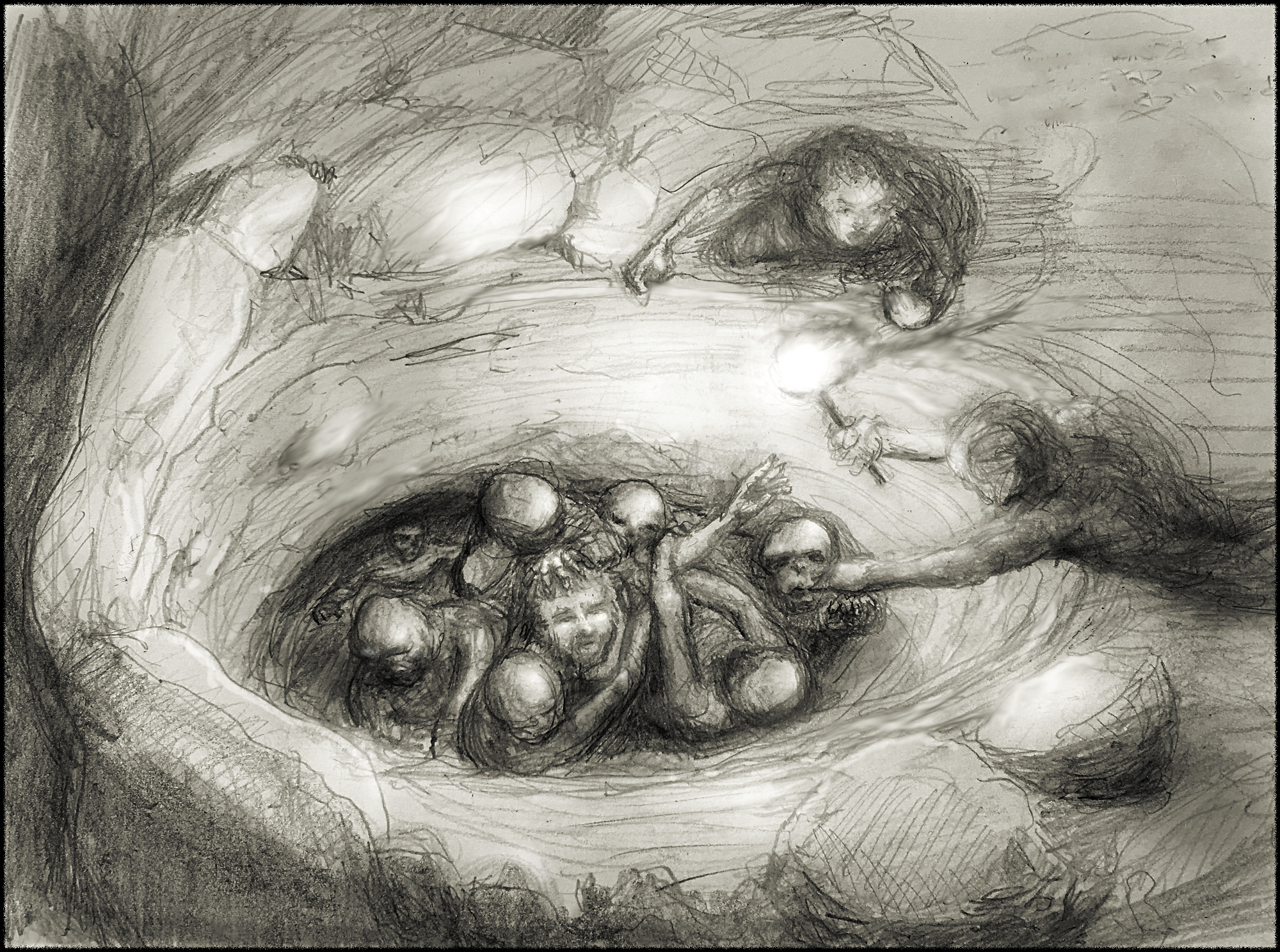 I know there's an abundance of mermaid-clone out there, but I couldn't resist crossing a human torso with a giant sea horse flank to make a Sea Centaur for a small underwater basin in my campaign. Of course I drew a picture. Here's the write-up of the area:

That's cool man. I believe there is an under-abundance of sea creatures in D&D. I like sahaugin, but in my opinion, they are always over-done and in every sea adventure (feels like) so I never try to use them. There should be way more weird stuff out there in the sea. I created a sea-horse people called the Histrix (for Hippocampus Histrix or spiny seahorse). I imagined them similar to your Sea Centaur except mine still retain the sea horse face and qualities. I was thinking Histrix are the 'Yaun Ti' of the sea as they would slither when on the ground. I also gave mine limited psionics. I like your 'spit kelp' feature!

You didn't ask, but....your write-up layout looks pretty tight. I know you don't care for bullet points, but your indents and colors make it easy to skim, so it works. You would have to do the 'color' option when doing a POD for DrivethruRPG to keep everything--not a big deal, but a little more expensive for consumer. If you publish, may be good to have your random encounters be doing something so that Bryce doesn't jump on you about it.
I like the 'line' as well in #19. I was using lines for a 5e conversion for Ascent and may explore their use more. For example, if an area has a special door, and you want to describe the door, then in my case--bullet points for more info for DM about the door, then a 'line' to separate the door from the inside of the room, then repeat the process.

Thanks for the nice feedback Malrex. This is still in a bleeding-edge state...as in wrote it two-hours before tonight's game, and sure enough the players went this direction (but avoided the kelp forest with the sea centaurs...so far). They did discovered the portal to the Islands and I could see the mental gears whirling when they recognized this was a possible short-cut to one of their long-term (and far off) destination. I think they will be back, but it may be quite awhile.

BTW, they shoved the beholder back into the bag of holding with telekinesis from a staff. I didn't see that coming!

Text, map and illustration wise, I'd have a lot of polishing to do before I'd publish---if I'd publish. Right now my write-up has about 400 pages like this. Super rough, with many, many holes, and a format I keep fooling with. Someday, I may have time. Right now the goal is just to keep ahead of my players, and keep honing my drawing skills. This one is way too static a pose and the composition is crap...but I like the light/dark kelp effect. It was a half-hour effort to put me in the writing mood.

The next "new monster" to write-up is the Aquatic Mimic. I think I'll move that one from the wandering table to a set piece---since I've got some elaborate ideas for it---more along the lines of a doppleganger than a mimic, really.
Last edited: Jan 19, 2022

Another attempt at a less static composition for the Sea Centaur. It definately needs something else too, but I haven't decided what. yet. Probably a drowning adventurer. 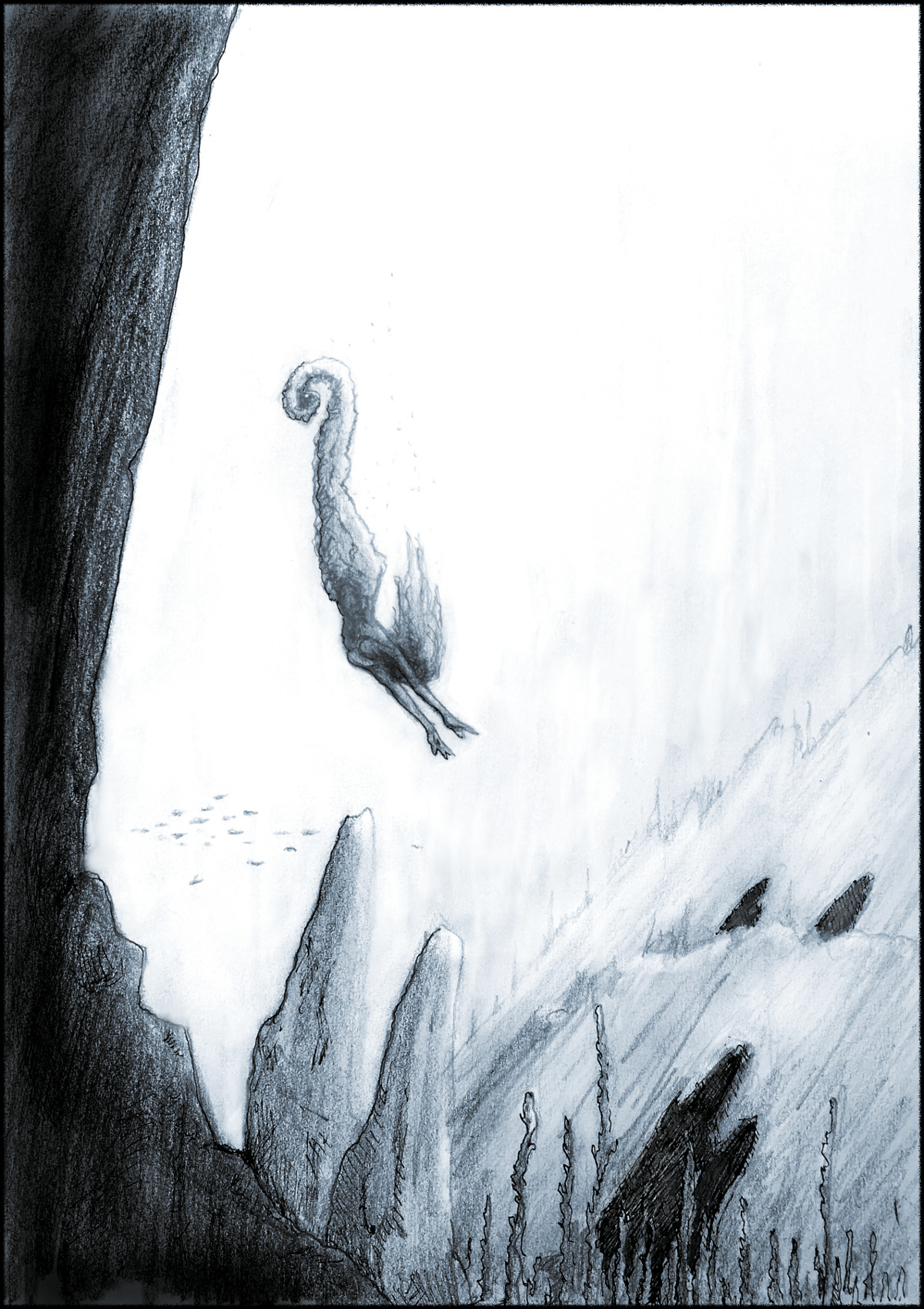 squeen said:
I know there's an abundance of mermaid-clone out there, but I couldn't resist crossing a human torso with a giant sea horse flank to make a Sea Centaur for a small underwater basin in my campaign. Of course I drew a picture. Here's the write-up of the area:

Hey squeen, this looks really great. This is a ‘write-up’ you say, but is this going to get published? The presentation, art and layout are looking pretty good, If this is just a small snippet of the whole thing, I’d be interested in the whole thing getting out there some day.

Thanks BG! Currently that's how I write up the material for my home campaign. I just wanted to put the Sea Centaur in some context.

I type all my stuff in LaTeX (faster for me) with art/maps and then color laser-print it to put into a plastic-comb spiral binder. I definitely recommend it because it's compact, lays flat, doesn't tear, and it's fairly easy to insert/replace sheets.

If I didn't keep a typed write-up, I would drown in all my hand-written notes without a doubt. LaTeX also has some handy facilities for auto-generating the Table of Contents, auto-numbers sections/subsection, and even builds an Index so you can find those unique magic items by name in case you didn't jot everything down on the player's sheet. I know LaTeX is not for everyone, but I'm a engineer and programmer, so I making a document that "compiles" feels natural and I like the precise control you can get with the layout (points!).

Someday I hope to polish it up (a lot) and print it hardcover to give to my players after the end of the campaign. After that, I may put it out there publically too. Right now it's a real pleasure as a hobby, and I wouldn't want it to turn into a chore. But all that is many years away at a minimum. Right now the realistic goal is just to keep creating content to stay ahead of the player's movement in the campaign and learn illustration well enough to someday do it justice (BTW, I did not do the cover...that's from before I started learning to draw---but I love it---the mythic rivers of the greek underworld!).

If ever finished, it would be a part vanity project and part record of the decade I spent playing with my kids...which I assure you is quite vanilla OD&D/AD&D filled with hackneyed tropes and just about every stolen notion from fantasy & sci-fi you can imagine (hence the size). Even the title "Lost City" was the name of one of my old DM's worlds (which incidentally predated the TSR module by a few years)...it's an homage to him. It might be more accurate (and less confusing) to call it "Lost Cities", because there's one that's lost and one that is secretly about to fall. Hey! There's a title! "Fallen Cities". See, blathering on about your campaign in forums isn't a complete waste of time!

That said, I may break a smaller portion of it off for OSRIC 15 or NoArtPunk#2, if I can get over the hump with work...which now looks like some time this summer at best (I work on an R&D program, hard to say when things will come together...constant loose ends---just this morning I discovered the overnight simulation runs went to hell. ).
Last edited: Jan 19, 2022
B

Never heard of LaTex, but that looks pretty good. I hope you get the time and inclination to put it out there, these kind of home-campaign products are great. And vanilla is good, just like ‘odd and weird’, as long as it is good, it’s good Bad odd and weird is just as bad as bad vanilla, and only has the advantage of showing you something novel to do that you may never have thought of doing before.

It's been around since the dawn of computing and written by one of it's greats. It's also free!

I appreaciate your encouragement. Thanks.

Soup of the Day --- looking less orc and more efreeti/Batman (also was suppose to be holding a lantern, but it all slipped away from me along with the now cropped legs!) 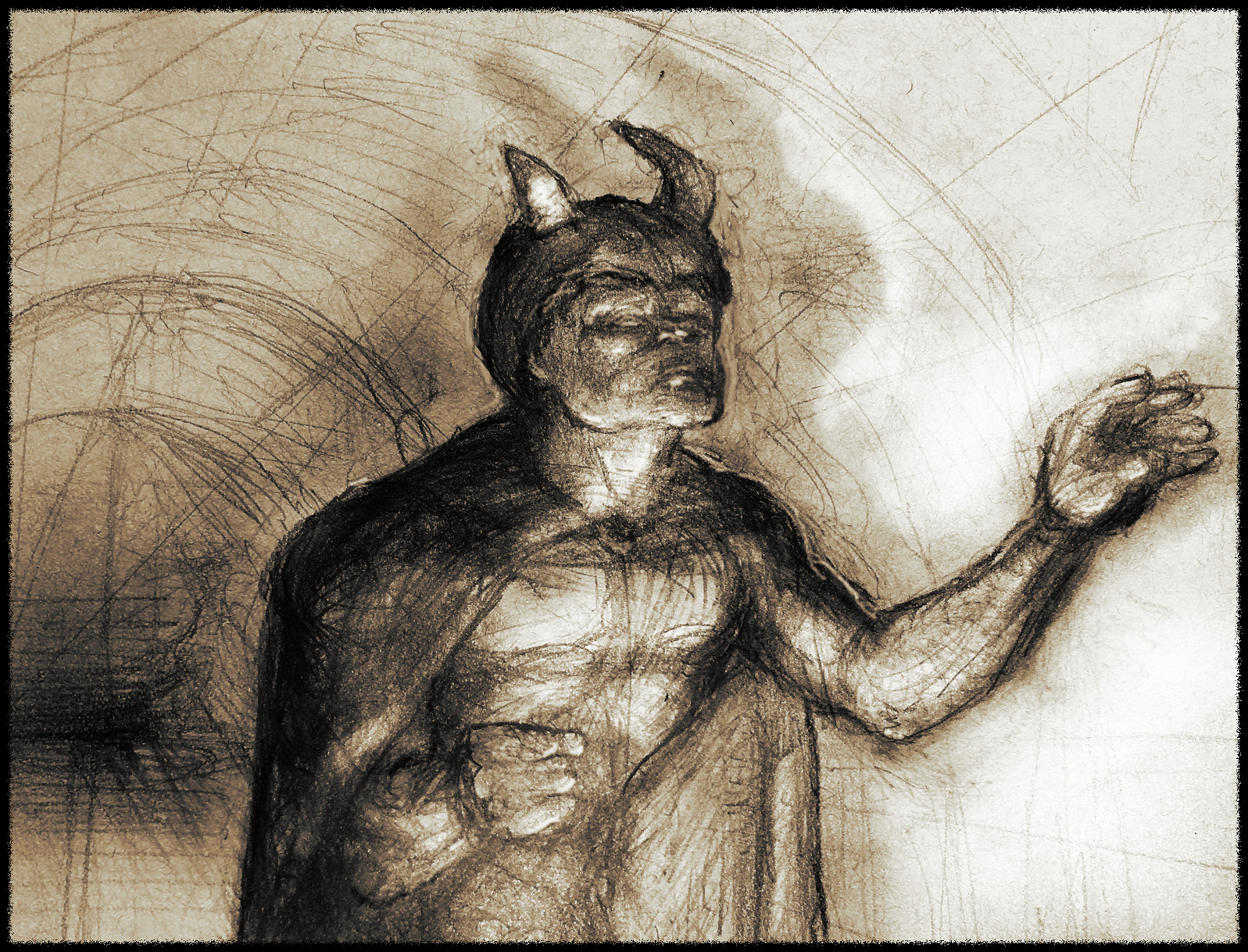 Another Heinrich Kley "master's study" (that's art-talk which means I tried to copy one of his!) 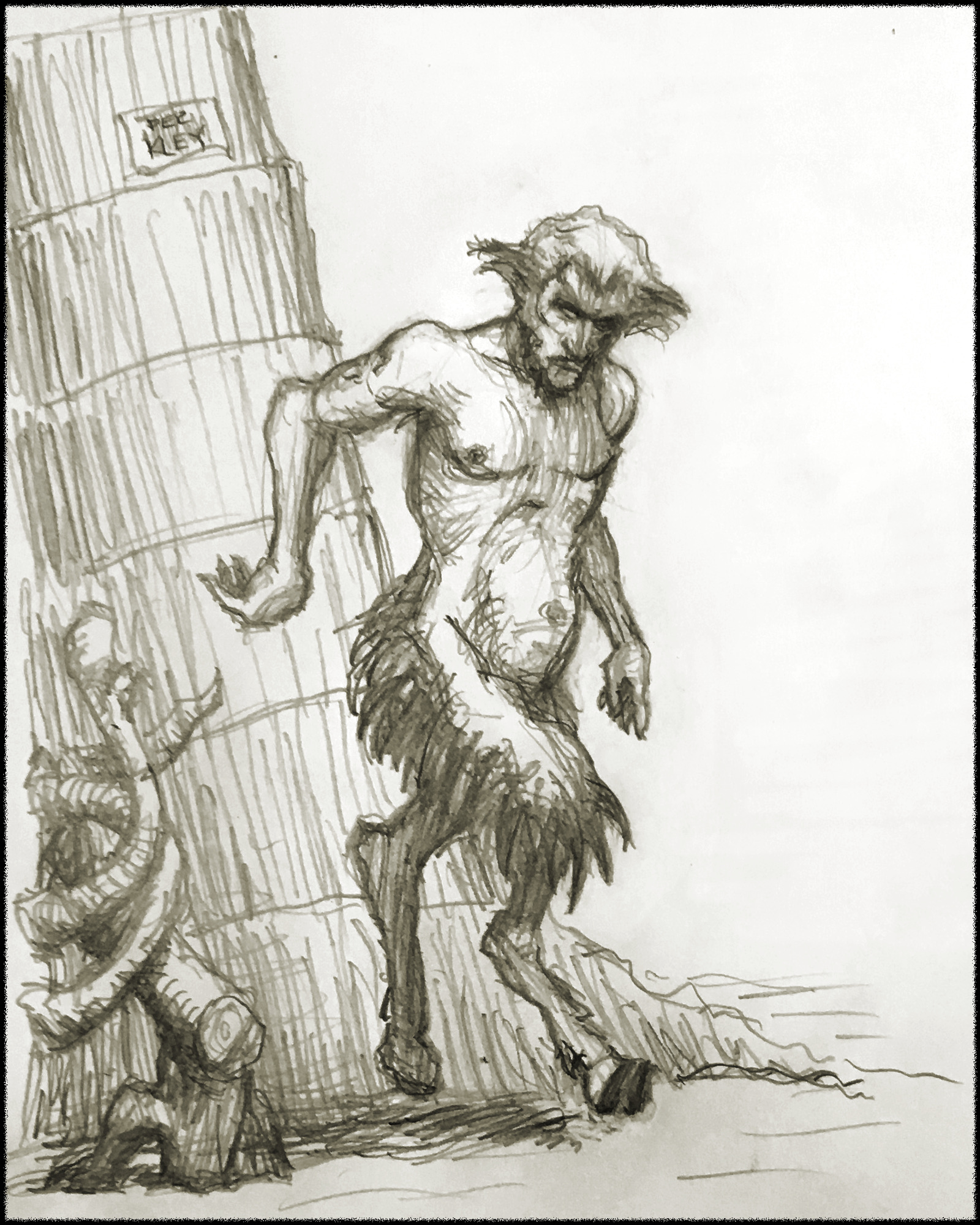 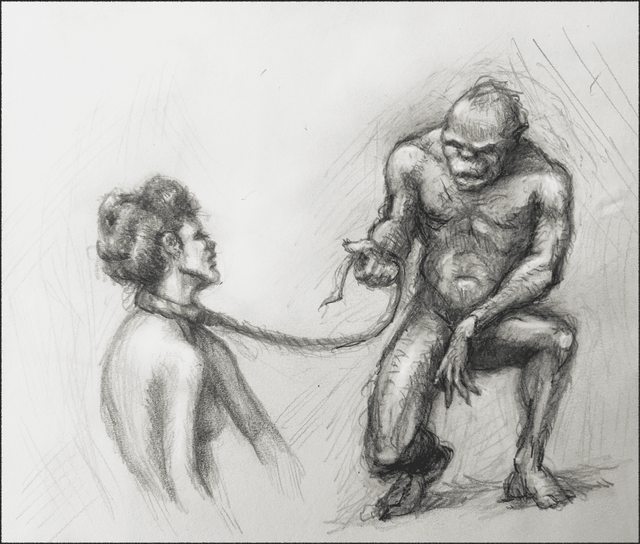 An Imp Under Glass
I stole the fantastical tech from one of this guy's posted art portfolio (he's got a seriously admirable Moebius vibe going!), and just put a demon in it instead of a potted plant. I was especially interested in how he drew the illusion of glass, but in general his facility to create and shade complex machinery is a wonderful art skill (I currently lack). NOTE: There was a lot of GIMP tweakery in this one. 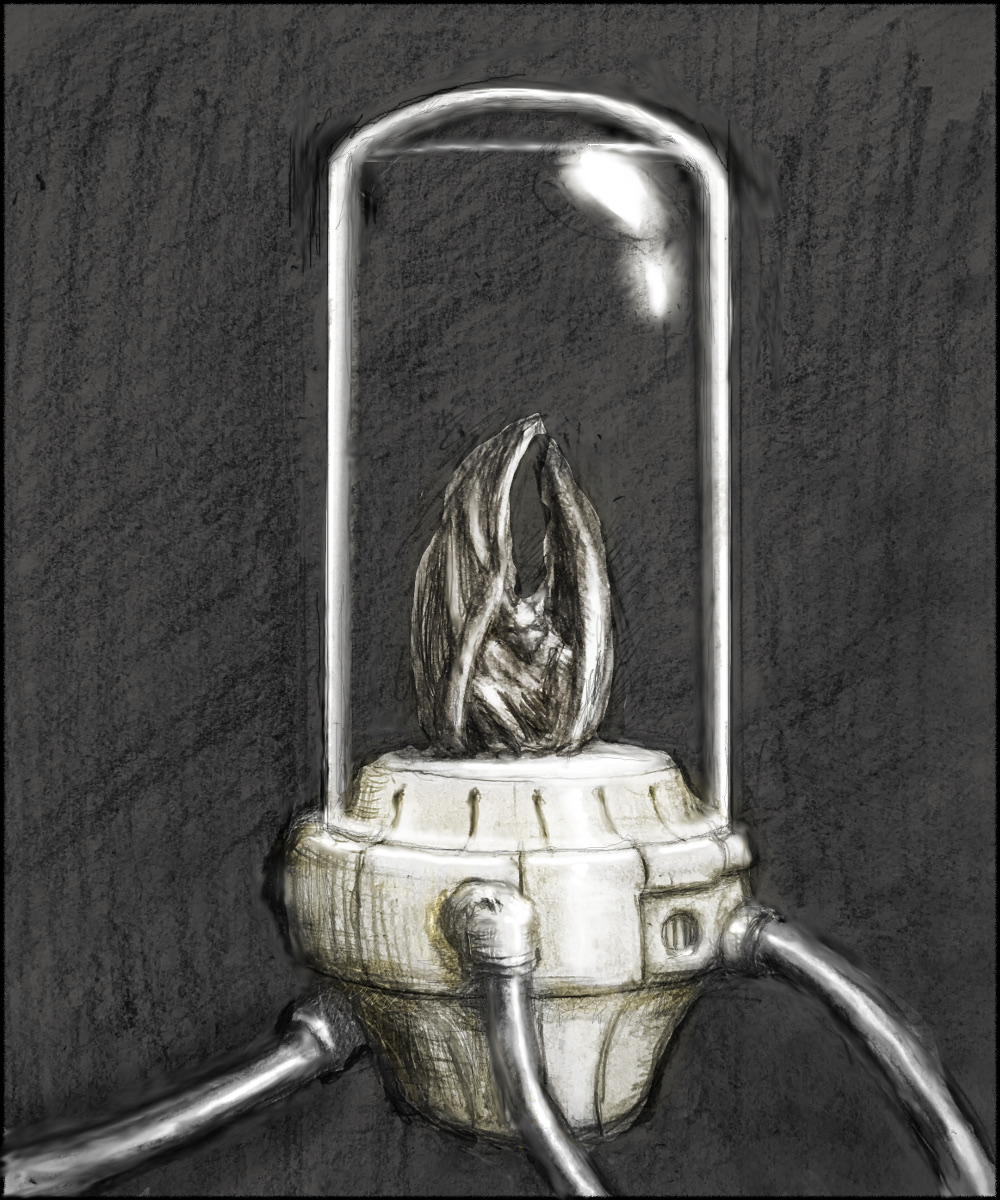 Keep on the Badlands
More cylinders in perspective slapped together and looking a bit like the Stay-Puff Marshmallow man. 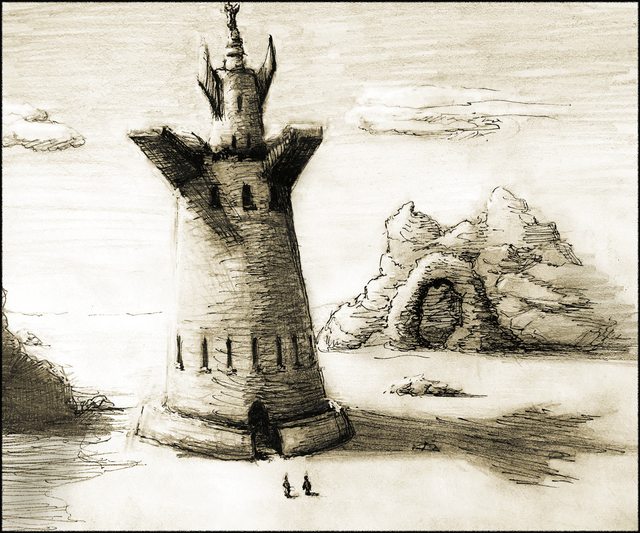 Fuck man you can illustrate my next adventure OK?

For those of you like @Malrex and @Melan that commission art, here's a fella who does some wonderful pen and ink that I just stumbled across.